PlayStation 4 Pro is undoubtedly a very powerful game console that stands out in many aspects in the video game space. It boasts some of real solid features that unarguably make it a mighty high-end game console designed for professional gamers. With PS4 Pro SSD upgrade it’s possible now to make this game console even more powerful than ever.

According to the modern standards, PS4 Pro is impressive in everything except that related to storage. In fact, this is almost the only weak side in this mighty game console. To professionals, it’s a major drawback indeed.

Certainly, Solid State Drive (SSD) is the best storage upgrade for PS4 Pro in terms of performance. It offers up to 50% performance boost. And now, especially after Sony added a new feature to the PS4 System Software called Boost Mode, which is designed solely for PS4 Pro model, users can take more advantages of the power of SSD with their console. 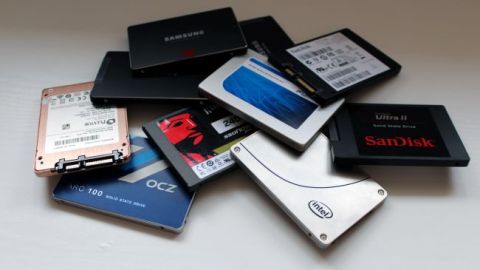 The standards for choosing the best SSD for PS4 Pro differ from those for PC or MAC. That’s due to the fact that game consoles in general (and PS4 Pro is NOT an exception) are not as powerful as computers that are designed for more than just gaming. But, the good news here is that there’s a trend by Sony to broadly support PS4 Pro with the upcoming firmware updates, and the Boost Mode is just the beginning for this wide-range support.

Moreover, game makers will develop/update their games to become fully compatible with the enhanced features of PS4 Pro. That includes its support for SATA III, which allows SATA III storage devices, such as an SSD, to have a remarkable effect on the overall performance of the game.

In a nutshell, that means PS4-Pro-optimized games will function better on PS4 Pro in some major aspects. It will take gaming experience to the next level.

We will lay out below the best SSDs we recommend for PS4 Pro console. If you wish to read further on this topic, you can skip this section to the next one.

This is the most popular PS4 Pro SSD size, and it’s suitable for the overwhelming majority of users. It comes with almost the same size of the stock hard drive, and as long as you are the only user for your game console, or you have an additional partner on the same console, this 1tb SSD storage capacity will probably suffice.

The following drives feature good alternatives to the above one. They offer 1tb of storage capacity and high data transfer rate, with the same price range (under $300) as our top recommendation.

The 2tb capacity SSD is best suited for enthusiasts with exceptional storage needs. Most enthusiasts are content with 1tb though. But when they need an additional storage space, they use an external hard drive for this purpose.

This PS4 Pro SSD size comes with a high price tag that most users cannot afford. But if your budget is fine with that, here we list below the best 2tb SSDs for PS4 Pro:

There’s only one 2tb SSD that can compete with the above drive in terms of price and performance. Other SSDs with the same capacities are too expensive and we won’t be recommending them.

When comparing the performance of PS4 Pro CPU and the performance of SSD, we can easily tell there’s a big gap between the two in the favor of SSD. This results in a bottleneck in the data transfer rate between the CPU and SSD. That consequently constrains SSD from operating at its peak performance level. This explains why the benchmark numbers of SSDs inside PS4 Pro barely reach the half of the same SSD inside a computer with a powerful CPU.

We won’t be too technical here, but we have to enlighten you about this matter. That’s in order to understand on what basis we picked the SSDs in our recommendation list above.

Even a mainstream SSD is a waste of money for the same reason. In fact, the best SSD type you can get for PS4 Pro is the entry-level. The entry-level SSD offers the maximum data transfer rate that the CPU of PS4 Pro can handle. That’s with almost a difference of $100 in price between it and a mainstream SSD, like Samsung 850 EVO SSD.

SSD Features to Look for

The SSDs we have recommended for PS4 Pro share the following common features:

Other features, such as encryption and NAND-memory type are not important in the game console environment. That’s because they won’t add any noticeable improvement in performance.

To better illustrate why you have to upgrade the internal hard drive of PS4 Pro to an SSD, you need to know what kind of storage device PS4 Pro employs for its storage works. It’s simply a mechanical hard disk drive (hdd) in 2.5-inch form factor. It’s configured with SATA II interface and spins at 5400 RPM.

We have made a detailed article studying and investigating PS4 Pro stock hard drive. Click here to visit it.

Such a mighty game console designed for professionals having such a storage device is, indeed, a big shame. Sony was aware of this already, but it’s main goal was to reduce the price of PS4 Pro to the lowest possible level. That’s to gain extra marketing points against its competitors.

On the other hand, it’s ridiculous to know that PS4 Pro supports the 3rd generation of Serial-ATA (i.e. SATA III). Whereas its hard drive only supports the older generation SATA-II. That indicates that this drive isn’t really intended to be a permanent storage solution for PS4 Pro. It’s a clear hint that PS4 Pro is worth a better storage upgrade than the stock hard drive.

To read more about PS4 Pro hard drive and its specifications, please visit this article.

Only PS4 Pro Model is worth an SSD

We have stated earlier that PS4 Pro comes with enhanced features and advanced support. That makes an SSD an inevitable storage upgrade to power users. It offers to them the best gaming experience with their game console.

There’re several reasons why PS4 Standard cannot take the full advantages of the performance optimization an SSD offers. The most important ones are:

For these three major reasons you won’t observe any big performance difference when using an SSD on either PS4 or PS4 PRO with the same version of the game.

But now, the situation is changing in the favor of PS4 PRO. Many games now are being optimized to meet PS4 PRO standards. So if you’re a PS4 PRO user, expect a tangible performance gain once your favorite game is updated.

Moreover, Sony is constantly updating PS4 System Software and adding a new features to it. That’s to help PS4 Pro users in specific to get more power from their mighty game console, and the Boost Mode feature that was designed only for PS4 Pro is an indicator of Sony’s trend in this matter.

So, with SATA 3.0 interface, powerful processor, and the new Boost Mode feature, PS4 PRO’s performance can be go to higher levels. In fact, a professional game console like PS4 PRO with its premium features you can equip with an SSD instead of a classical hard drive in order to acquire the utmost advantages out of it.

Based on the fact that a high-end SSD is basically designed to undergo very difficult situations of data processing dealing with huge heaps of heavyweight, multitask workloads, which can happen only in advanced computer systems, and no matter how frequently or extremely you use your game console, the data workloads are considered minimal compared to that advanced computers are made to handle.

For this reason we can confidently say that an enthusiast (high-end) SSD is not for game consoles. You’ll just waste your money with it.

You have then two choices here, either go for a mainstream SSD or entry-level SSD. The mainstream SSD comes below the high-end SSD in terms of performance and speed. It’s still a pretty good product for the overwhelming majority of computer users. But still.. we don’t recommend it for any game console, including PS4 Pro.

We only recommend entry-level SSD, and it can easily drive PS4 Pro to the maximum level of performance. That’s because, as has been stated above, PS4 Pro processor is not designed to handle multitasks or instant heavy workloads that an SSD can handle. Just imagine it. The maximum data transfer rate PS4 Pro processor can handle is around 250 MB/s, and modern entry-level SSDs offer up to 500 MB/s sequential read and around 250 MB/s sequential write. (Note that write speed is only important when installing games, so it’s not a big deal here).

All that impels us to confidently say that entry-level SSD is the best SSD class you can get for PS4 Pro.

So, based on this perspective, we have made our own criteria with varied factors for picking the best SSDs for PS4 PRO:

Like what’s said previously, an SSD is the best storage upgrade for PS4 Pro in terms of performance, but that doesn’t mean it’s free of disadvantages/drawbacks, just like anything else in this life.

Let’s start first with listing the advantages of SSDs inside PS4 Pro console, compared to the stock hard drive:

There are a few major advantages an SSD offers to PS4 Pro, that are:

After running a bunch of heavy games on PS4 PRO with the stock hard drive in the first round then with an SSD in the second round, the performance benchmarks showed up as seen below:

The benchmark numbers are very impressive. The game load time can be minimized to the half of that on the stock hard drive, which is quite appealing.

SSDs have their own drawbacks as well. When you decide to pick one for your PS4 Pro, you have to balance between the cons and pros before making any step forward.

Honestly, we couldn’t find other than three drawbacks with SSDs on PS4 Pro, which are:

That’s it. An SSD, despite its drawbacks, still justifies its use in game consoles. With the appealing features it offers, it leave all other storage devices unable to be a real challenger.

The SSD is undoubtedly a great storage devices. It offers outstanding features to PS4 Pro console that you won’t get from any other storage device. But this doesn’t come without an extra expense. If price is a marginal issue to you, and your main concern is performance, then rest assured that an SSD is ultimately the right storage upgrade solution for your PS4 Pro. You’ll see then how it takes the gaming experience to the next level.

And just remember, PS4 Pro SSD upgrade is not mandatory. You can still get a remarkable performance boost with an SSHD. We suggest to have a look at Seagate FireCuda 2tb Gaming SSHD before making up your mind.