One of our users complained of getting Error Code (SU-30746-0) on their PS4 when trying to install a new update of a game on their console. He said:

Hi, my PS4 Slim started up fine and I selected a game. When I did that it asked me to update so I did and it was pretty quick. I looked up after a while thinking it was restarting but it didn’t turn back on after the update so I tuned it on myself. When it tuned on the screen read “system software update” and “an error has occurred. (SU-30746-0).” I tried to press enter and back using the X and O buttons but nothing happened it was stuck. Every time I restart it this message is there and my screen is frozen. Is there a way to fix this?

This blog post will be a detailed answer to this question explaining what this error is and why does it happen and the possible methods to fix it.

When you try to update the PS4 system software on your console, Error (SU-30746-0) might occur due to several reasons that we will address in the next section.

That PS4 error indicates that the update process has failed which has a direct impact on the functionality of the PS4 system software. The PS4 system software would have then a sort of data corruption to the extent that the whole system will stuck on a blue screen with the (SU-30746-0) error code.

To our knowledge so far, PS4 Error (SU-30746-0) has not been reported yet for other situations yet. All the reports we found stated that it would only occur after authorizing an update process on the PS4 system.

We already have discussed similar issues to that one, such as: PS4 update Error (CE-34788-0) fix, PS4 data corruption, and fixing PS4 freezing after update.

This guide though will focus on PS4 Error (SU-30746-0) trying to present viable and effective solution to this problem. 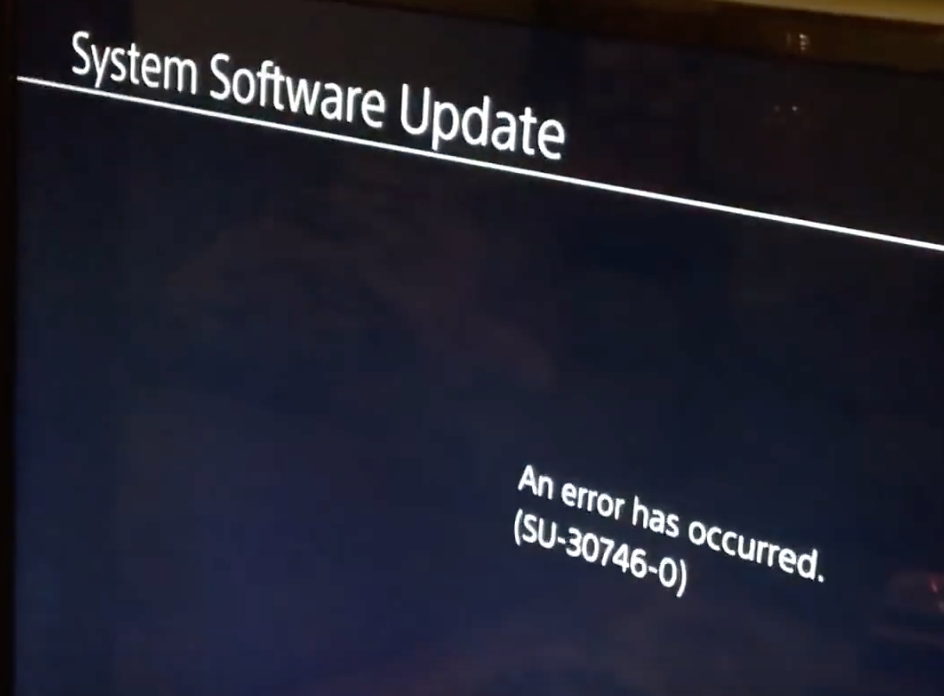 Let’s first preface all of the following with this: updates provided by Sony rarely cause problems. That’s rarely, not never, but when it happens, it hurts.

The end cause of PS4 Error (SU-30746-0) is a critical system core file corruption that the corrupted files are unable to perform as they should.

A PS4 system file is seen by the operating system as being instrumental to the function of the system itself. They contain code that tells the PS4 console how to respond and process commands. Moving them, deleting them or altering them in any way has the potential to cause widespread system failure or general instability.

What does it mean if a file is corrupted?

A corrupted file is one that is damaged, and does not perform properly. This can apply to any type of file, from app files to system files and all types of documents and media. Just about everybody has probably had an issue with a corrupted file at some point in time. In many cases it can be resolved with a simple reboot of your PS4 system, but sometimes the issues are more complex.

There are dozens of reasons why your PS4 system files might become corrupted and thus Error (SU-30746-0) occurs, but among the most common are:

So, these are the most common reasons for PS4 Error (SU-30746-0). Let’s learn now how to fix it and avoid it from happening in the future.

There are not many options you can try in order to fix PS4 Error (SU-30746-0). Once that error occurs, it means some of the PS4 system essential files are corrupted and must be replaced with intact ones.

It’s not uncommon for the PS4 to freeze up or lock up or a having a critical Error like (SU-30746-0). Sometimes, it just doesn’t want to work as well as you would like it too. You don’t have time to figure out what is wrong; all you know is that you need your PS4 back in working order now! The best thing you can do is initialize the console, which will delete everything and set it back to factory settings.

To do this to your PS4, you’ll need a USB hard drive or a thumb drive (with around 1GB of free space) and a computer with Internet access.

Put your PS4 in safe mode

There might be bad sectors on your PS4 hard drive that caused the data corruption issue, thus Error (SU-30746-0). The best thing you can do here before disposing of your PS4 HDD is to full format it on a PC. Doing so will fix bad sectors (by overriding them) and restore the original performance of the PS4 HDD.

Follow the steps in our PS4 internal HDD format guide for more details.

In order to avoid encountering PS4 Error (SU-30746-0) in the future, you need to take the following precautions: