PS4 PRO is arguably the most powerful game console in the market as of today, but to a large portion of its fanboys who’re classified as enthusiasts, the stock internal hard drive specifications are quite disappointing and don’t meet the expectations of an enthusiast from a storage device incorporated inside a mighty game console.

So, what are these “disappointing” specifications? And what are specifically the main reasons that make many users tend to upgrade/replace the stock hard drive with a newer one? And what are the available storage solutions for this purpose?

These questions and more you’ll find their sufficient answers within this article, so keep reading please. 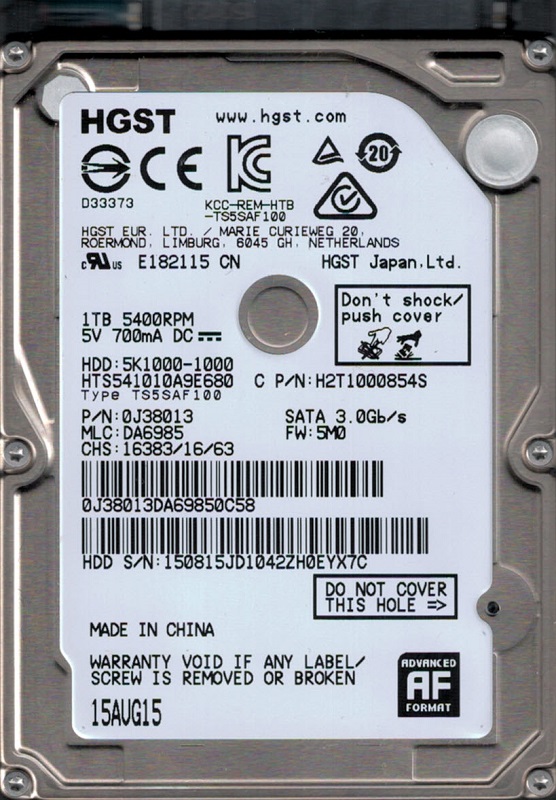 If you pull out the internal hard drive of PS4 PRO, you’re supposed to find an identical hard drive to that in the image on the right side. (click the image to enlarge)

The basic specifications can be easily observed on the front label of the drive, that are:

Any computer savvy can easily tell that this drive, with its specifications, is astonishingly worthless to be in a mighty game console like PS4 Pro. And if you’re serious about enhancing your gaming experience with PS4 Pro, and enjoy a remarkable performance boost, it’s inevitable, then, to upgrade PS4 Pro hard drive with a high-performance drive like Seagate Firecuda 2tb SSHD that offers unparalleled performance in the industry which makes it the fastest 2.5″ drive in history as of today.

Back to the topic. We’ll discuss below the main three specs of PS4 PRO HDD, that are: Size, Speed, Cache Memory and Interface.

The size of PS4 PRO hard drive is 1 Terabyte as advertised, but in reality you won’t get that much of storage capacity available for you. You have to expect to get around less than 900 GB as you see in the image below: 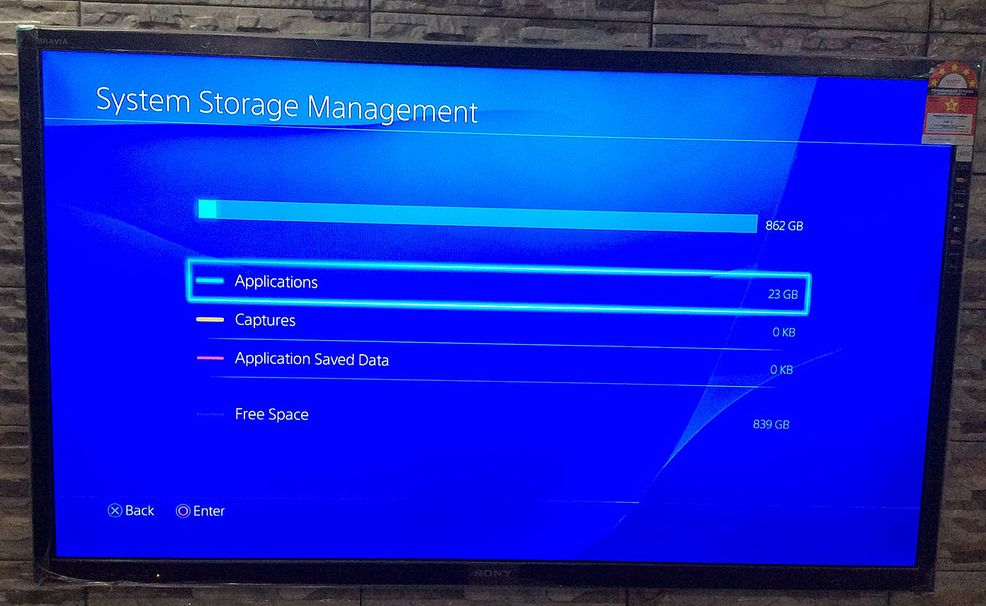 First of all, in computer science, according to binary standards, which is what PS4 operating system follow to determine file size, 1 TB is equal to 1024 GB. But in decimal standards, which is used in marketing a storage device, 1 TB means just 1000 GB. So here you have lost 24 GB of storage space.

Moreover, the hard drive filesystem that manages the functionality of the drive and controls stored data takes a percentage of the overall drive’s size to install.

Add to that the storage requirements of PS4 System Software which consumes more than 1 GB of space, and the newer the PS4 system software is, the larger the space that is consumed.

For instance, the full-package (not just the update patch) PS4 System software update 4.0 came with a size of almost 833 MB, whereas version 4.5 comes with a size of 877 MB.

That’s why your PS4 PRO hard drive available space might differ from what you see in this image as it was taken before PS4 Software update 4.5 that comes with additional file size.

With that lower spindle speed the drive is able to reach up to 108 MB/S transfer rate before it starts decreasing on a constant rate according to a test conducted by Tom’s Hardware team on the SATA III version of this drive as shown in the graph below that outlines this issue: 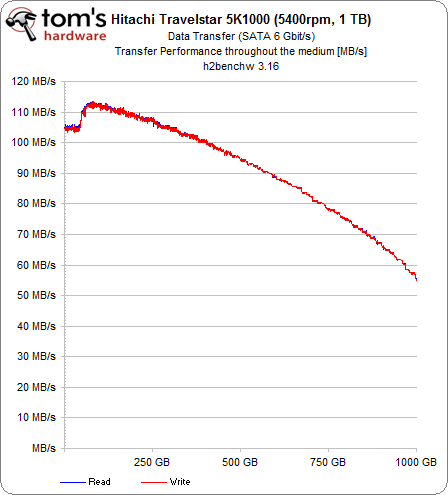 Cache memory significantly helps increase the speed of data transfer. The speed of the disk’s I/O interface to the computer almost never matches the speed at which the bits are transferred to and from the hard disk platter. The cache memory is used so that both the I/O interface and the disk read/write head can operate at full speed. Therefore the bigger it is, the higher speed and more consistent performance the drive will have.

SATA III was officially released in May 2009, and it offers a transfer rate of 6.0 Gbps that’s two times faster than its predecessor SATA II that offers only 3.0 Gbps transfer rate.

As for PS4 PRO console, it was officially released for the first time in Oct 2016, which means more than 7 years after the release of SATA III.

Doesn’t it sound weird enough to question the reasons that impelled Sony to use a SATA II hard drive (backward) instead of SATA III? Most probably Sony was aware that time how disgraceful it was for a professional game console to include an old obsolete piece of hardware in its flagship game console’s architecture, but the low price fascination of obsolete products was so irresistible to Sony in order to offer PS4 PRO to the audience with a competitive cost.

It’s worth to mention here that PS4 PRO motherboard supports SATA III interface, which presents its real power whenever a SATA III storage device is connected to it. That’s in fact a precautionary step by Sony to attract as largest fans as possible while maintaining the competitive price.

During our investigation on the real specifications of PS4 PRO stock hard drive, we have found some interesting facts that might shock you!

Our strategy for investigating this issue is solely based on research. We have collected all required information that helps us reach a logical conclusion.

► Step 1: Getting the official Datasheet

We went to HGST official website to read the datasheet of the investigated drive. Based on model number (HTS541010A9E680), we got to know that it’s in fact a SATA III drive, not SATA II, as you can see in the image below: 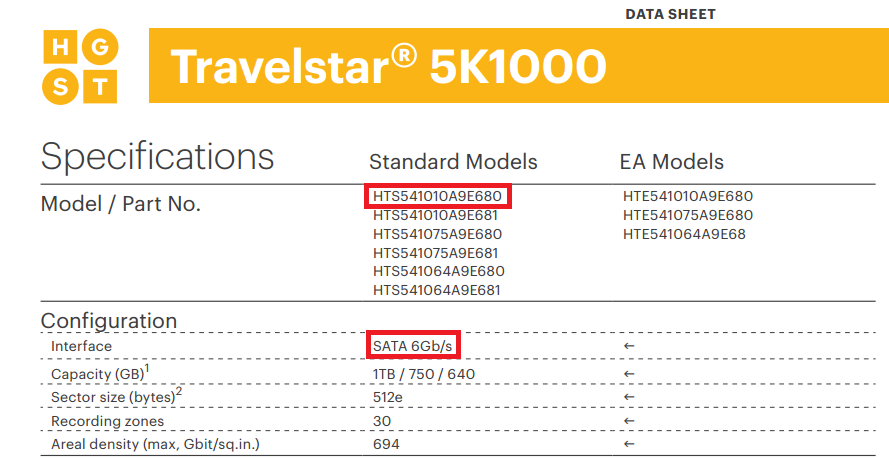 You can verify the image above by downloading the official datasheet of Travelstar® 5K1000 HTS541010A9E680.

We searched on Google Images for HTS541010A9E680 and we interestingly found two types of this model, the first configured with SATA II and the other with SATA III, and both come with the exact same model # as you can see below (click the image to enlarge it): 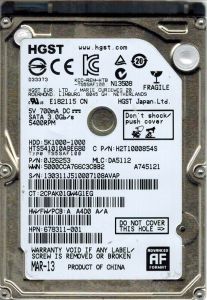 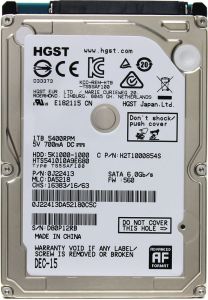 The picture is now clearer and it’s too easy to realize why Sony has opted for the hard drive with SATA II interface.

What we can deduce from this quick investigation is that the initial release of HGST Travelstar® 5K1000 was configured with SATA II interface, and it didn’t last too long until, for a reason (probably marketing purpose) it was modified and improved with SATA III to meet the latest trends in the consumer data storage segment at that time (i.e. year 2012).

But what to do with the heaps of the obsolete stocks in HGST’s stores of this hard drive? The answer is simple—conduct a dirty deal behind the scene with a huge company that would happily buy all the stocks for very low price. That way Sony would guarantee the lowest price for its flagship console that would crush the competitors, especially xBox One.

Is It Compulsory to Upgrade?

In fact, the PS4 PRO stock hard drive, although obsolete and too old, still performs nicely for its purpose, but not as a drive made for a superb high-end game console.

If you got PS4 PRO as a gift or for a cheap cost, you’re probably happy with the performance it offers. But to the one who bought it and paid from their own money, it’s a disappointment.

On the other hand, one of the best features of PS4 PRO is the ease of swapping/upgrading the stock hard drive. You can opt for a faster and larger drive for an adequate price without that won’t let you down. Check our PS4 PRO Storage Upgrade Guide for more details.