PS4 is Loud and Noisy? | Fixed By Experts

The loudest component in your PS4 is the fan, it spins faster when the console has more heat to dissipate. If PS4 suddenly starts making noise, the culprit is either the cooling fan or the hard drive. The PS4 cooling fan causes the loud noise when it runs non-stop at the highest possible speed. As for the PS4 hard drive, it generates loud clicking noise when there’s a physical damage with one of its components. Here, in this guide, you’ll learn all possible way to fix loud PS4 and get it function normally like before. 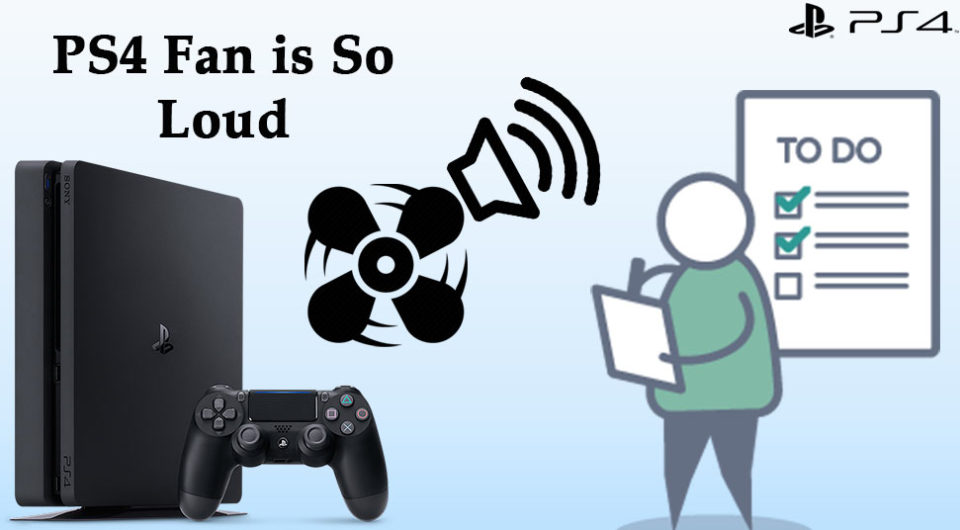 The two biggest culprits for excess noise in PS4 are the cooling fan and the hard disk drive. PS4 cooling fan moves the heat produced by the processor, motherboard, and graphics card out of the console. If the cooling fan is loose or not powerful enough, it can create noise.

On the other hand, PS4 hard drive (HDD) can also make noise as the platters spin and the head seeks data. Loud noise is generally a very bad sign and should be dealt with immediately.

PS4 console can also make noise if any components have come loose and are vibrating against the frame of the PS4. If the PS4 is in the wrong area, any noise from inside the console can become amplified.

As PS4’s age, they acquire dust, pet hair, and lint, which can block the cooling fan from running efficiently. Parts can also come loose, or just wear out, increasing vibrations and noise. In fact, in most cases, dust is the main reason for the whole situation. There is no getting around it, no matter how clean your area is. All those dust particles you see every now and then in the air get in through your vents and build up into a nasty web of dust. All of which is why your fan runs fast and loud, causing the noise you hear from PS4.

Below are some crucial, easy steps you can take (right now!) to silence your PS4, maximize your speed/performance, and ensure your PS4 lasts for a few more years.

How to Make the PS4 Quieter

There are 5 levels of steps you can take to quiet your PS4, depending on what part is making the noise.

Rubber feet are placed on the bottom of PS4

Make sure there are rubber feet on the bottom of the PS4 and that they are resting on a flat surface. If the rubber feet are missing, you can get replacements, or put the PS4 on a piece of carpet or another soft surface. If the room is warm or the PS4 is otherwise overheating, there are cooling pads that can help cool the PS4 and absorb some of the sound and vibrations. Find out more about keeping your PS4 cool with these tips.

Sometimes it helps to move the PS4 under the desk or into a more closed location to muffle the noise. This can be tricky because you don’t want to increase the insulation around the console, which will cause the fans to run longer and harder. If the fans are the source of the noise, this will aggravate the problem. If you move the PS4, make sure there’s at least two inches of empty space on all sides of the console for cooling.

Additionally, since the PS4 cooling fan is at the bottom, it’s quite a smart thing to leave a bit more space underneath your console. That way, the fan will blow much more air through it and keep it simple to cool your PS4. Noise will decrease and the cooling fan will relax. As an elevation tool, you can use almost everything. Of course, this works as long as it doesn’t cover the fan that you want to lift from the primary surface.

When the PS4 database is corrupted due to several reasons, this will cause pressure on the CPU and get it to overheat. The same applies when you improperly install a game or its update and it starts to malfunction. This will cause a huge load on the CPU that will increase its temperature, and accordingly the cooling fan will run faster causing a loud noise.

Rebuilding the PS4 database will mostly resolve this problem. But if that doesn’t work either, you may want to FULL initialize PS4 and reinstall the PS4 system software from scratch. That way you will make sure that what causes the loud noise in PS4 isn’t related to the system itself.

If the easy solutions above didn’t help the situation, you’ll need to dive deeper. Take the cover off your PS4 and check all the attachments; screws, gaskets, and grommets. If there are any screws loose, tighten them. Replace any worn or missing gaskets and grommets.

While you have the cover off your PS4, use a soft brush and a can of compressed air to blow the dust out of the PS4. Don’t force the compressed air into the cooling fan, it can damage it. Carefully blow the air around the fan. 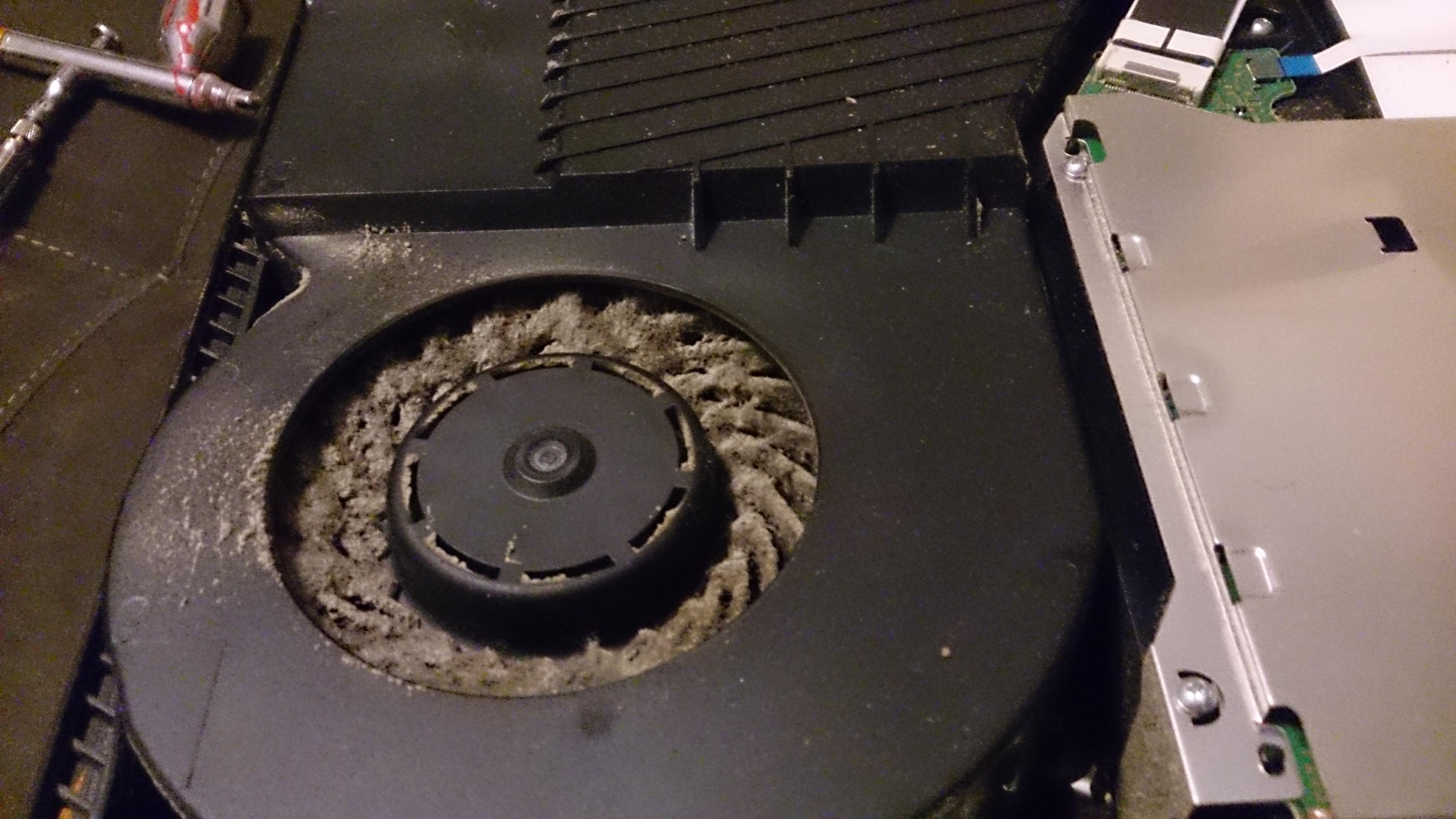 When the cooling fan of PS4 is dirty and full of dust, it will run at its maximum speed causing loud noise

If you’ve ever opened up a game console, you know how much dust can get sucked up in there. You may find that dust is clogging up the fan and the space around it, causing it to run loud and hot. That causes PS4 to overheat and locking up, and, accordingly, PS4 will make a loud noise.

The dust accumulation can damage your PS4 in several ways. The most common one is obstruction of the fan blades. As you may assume, this obstruction leads to louder spinning and thereby increased noise.

Since the processor is the heart of PS4, you should have a routine of cleaning its cooler. The dust accumulation can affect it in degrading ways.

Basically, you will need to blow out the dust every now and then (approximately once a year) in order to keep it working properly.

I know you might be frightened to open your console, so you can leave it to professional.

However, if you’ve decided to do it by yourself, there are few, not-that-hard steps of cleaning the PS4 cooling fan and the accumulated dust. The only thing that you will need in order to do this is a small screwdriver.

Follow these simple steps to clean the PS4 cooling fan and make sure you blow out the dust properly.

Therefore, if it’s still under warranty, you can take it to the professional and let it fix it instead of you.

After blowing out the dust, you will be able to proceed working normally on your PS4 without losing nerves because of it being so loud. 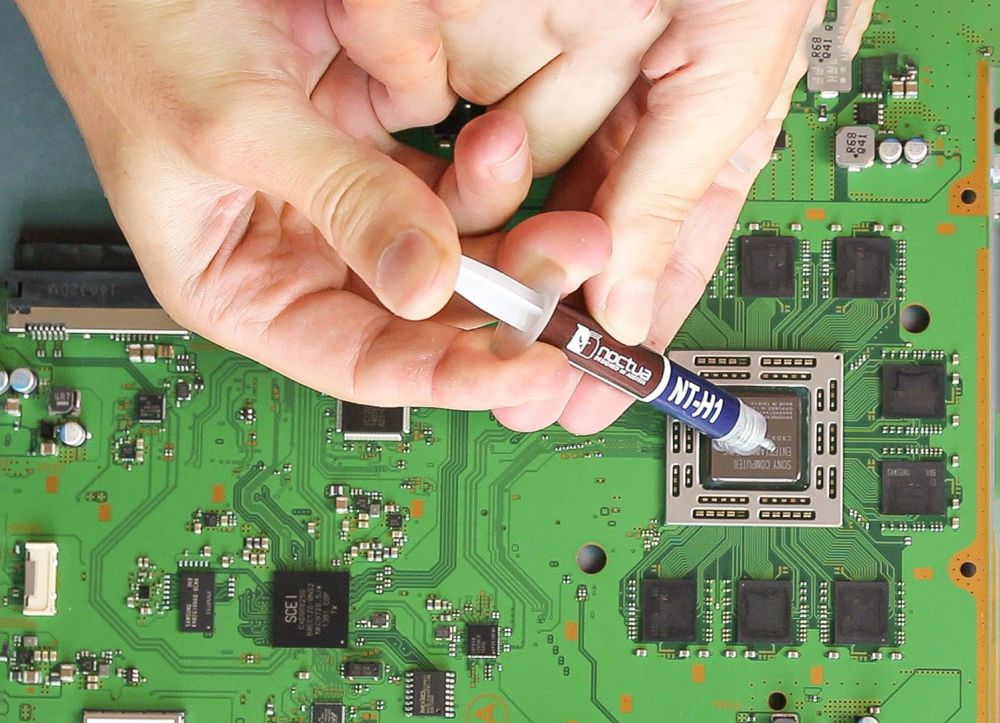 Not every geek will advise you to do that with your PS4, although some people got really impressive results.

One of our valued readers named “Daniel” reacted to this article with this comment:

As for my personal advise, don’t go for this option unless nothing works for you. Make it the last resort.

When the PS4 hard drive fails or undergoes serious errors, it’ll generate loud clicking noise in some cases. That’s especially if the failure is caused by a physical damage.

If you’re not considering upgrading PS4 internal hard drive, you may consider to maintain the stock drive.

In the PS4 hard drive failure article you’ll find everything you need to fix a corrupted hard PS4 hard drive. But if that doesn’t work either, you may want to replace the old drive with a new one, as stated earlier.

If you’ve already done everything to fix the PS4 loud noise issue yet nothing worked, let’s consider a cooling stand. The PS4 cooling stand offers extra cooling method for your game console and keeps it as cool as possible. This will improve the performance of PS4 and immensely reduces the noise emitted from the cooling fan.

When PS4 is becoming too loud and making annoying noise, just don’t panic. The issue is usually not that difficult to fix. All what you need is to check inside the PS4 and see if it’s clean or not. If you clean it and the noise still coming out, try to maintain the internal hard drive. A hard drive failure can cause that loud noise if the damage is physical.

After all, if you’ve done your best to fix your noisy PS4 and failed, take your console to a technician. There you’ll find a way out of this situation.