Why Is PS4 Overheating & Becoming Too Hot? | Fixed By Experts

Heat is a PS4’s enemy. Game consoles like PS4 are designed with heat dispersion and ventilation in mind so they don’t overheat. If too much heat builds up, your PS4 may become unstable, suddenly shut down, or even suffer component damage. In fact, your PS4 contains a lot of parts, almost all of which create heat when your console is on. Some parts, like the CPU and graphics card, can get so hot you could cook on them. So, keeping your PS4 running within safe temperatures is important, especially as the temperature rises outside.

Much of this heat is moved out of the PS4’s case by one large fan. If the PS4 isn’t removing the hot air fast enough, the temperature can get so hot that you risk serious damage to your console. Needless to say, keeping your PS4 cool should be a top priority.

There are a couple of basic reasons your PS4 can overheat. The first is when misbehaving or damaged components generate more heat than they should. Another is when the cooling system that’s supposed to keep overheating from happening isn’t doing it’s job. In this article, we’re going to look at how to tell when overheating is the problem and how to narrow down the problem.

How Your PS4 Cools Itself 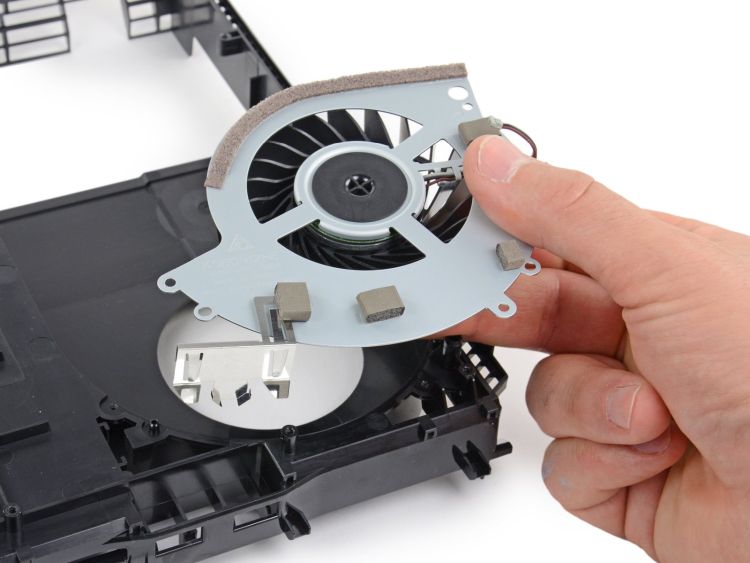 PS4 components generate a fair bit of heat during normal use. Air flow is the cooling system that PS4 adopts to dissipate this heat. All the PS4 components rely on the case being able to draw in cooler air from the outside and expel hot air that builds up in the case. How the main airflow works in the PS4 really depends on its design that varies according to its model. On the base PS4 model, you’ll just see a single exhaust fan with vents on the side, as well as a heat sink that clings to EMI shielding. As for PS4 Pro, the heat sink is bigger and the exhaust fan is designed to deliver better airflow over all the interior components.

A Brief on PS4 Cooling System 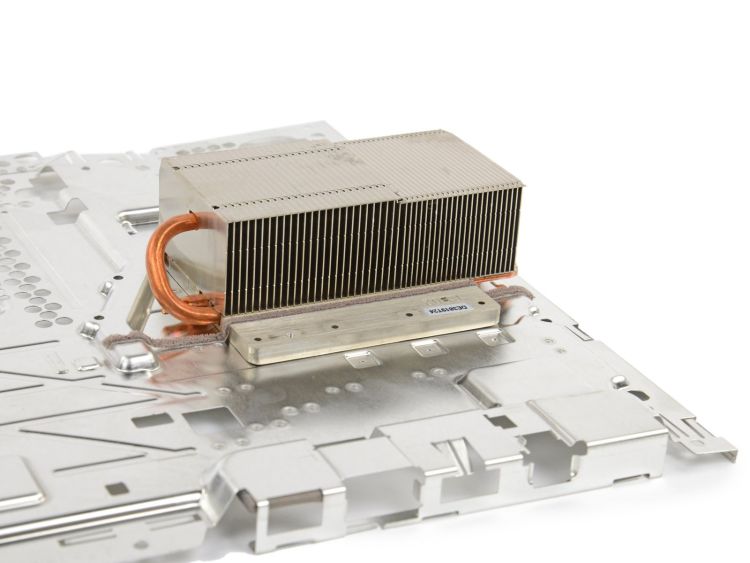 Heat mitigation is a huge aspect to any high-powered device, especially a console with a beefy APU; too much heat can leave the sleek trapezoidal box a smoldering mess. Sony had to design a viable cooling solution to keep its console at a stable rate–especially with the inclusion of an internal power source.

As for specifics on the airflow, the design for the airflow inside the PS4 console was taken from the N version, while the G version contributed to how the power supply, cooling fan, and heat sink can be placed. The PS4’s intake splits airflow between the bottom and top of unit. The air then passes through the heat sink, cooling the console’s power solution and exist via the exhaust port. Positive and negative pressure from the unit’s fan uniformly spreads the airflow, and Sony keeps the “eye of the storm” or “snail shell” design to maximize efficiency.

Everything from the fan’s shape (which has been shaped to reduce noise) to the motor that powers it (a three-phase unit that efficiently handles power consumption) has been specifically tailored to the PlayStation 4’s cooling system. Additionally, the console has an internal sensor that rates the ambient temperature of the air that’s expelled via the exhaust port, affording for moderation of external temperatures.

Despite all this, the console still heats up quite a lot with usage (still under the 50-degree Celsius point, though). Thermal imaging shows how hot the core becomes. This is also the place where the APU and the system memory have been placed.

The Basics of Overheating PS4

How Do You Know Your PS4 Is Overheating?

When using the PS4 for typical tasks, you shouldn’t have to worry about overheating at all. That’s unless something is really going wrong. A sure sign that your PS4 is overheating is when the cooling fan is always running at maximum speed. When the PS4 is overheating, the fan usually blows harder for a longer time in an effort to increase airflow and lower the temperature. So, listen for loud or unusual sounds that may indicate the fan is failing.

You may also experience reduced performance because an overheating CPU cuts back its clock speed to escape heat pressure. In this case, the system’s fail-safe software may trigger a sudden shut down to prevent hardware damage.

What Causes PS4 to Overheat PS4 overheating can happen for several reasons. It may be that a component is malfunctioning. It may be a hardware driver that isn’t behaving well. Or perhaps there’s a file corruption/conflict that confuses the system and impacts how the CPU/GPU works.

But more than likely, it’s because the airflow cooling system isn’t operating as well as it should be. The potential reasons for that include dust blocking intake grills or exhaust ports, a clogged up fan, or a degenerated thermal grease (aka thermal compound) between the heat sink and the CPU or GPU. You can fix all of these things yourself, though some jobs will be tougher than others.

If you believe that your PS4 takes its fair share of environmental cooling, and it’s clean enough inside, yet it overheats, it can be either a hardware defect or a file conflict within the PS4 system that causes this problem. This might be the cause of a corrupted PS4 database. It’s the result of improper installation of game/app or its update. It can be also due to unsuccessful update of PS4 system software. Fixing that is quite easy—Rebuild PS4 database. If that doesn’t work, full initializing PS4 should fix it. But if it was a hardware defect, especially the graphics card, only an experienced technician can fix it for you.

Why an Overheated PS4 Is Dangerous

Simply put, if your PS4 becomes too hot, it is possible to destroy and shorten the lifespan of the hardware inside, leading to irreparable damage and potential data loss. Besides losing your data, heat pecks away at your PS4’s internal organs—the motherboard, CPU, and more—significantly shortening its lifespan.

Besides the most obvious reason to keep your PS4 cool, a hot PS4 will also run slower than a cooler console. So to prevent your PS4 from slowing down, make sure that it is running at a moderate or low temperature.

So, if your PS4 is overheating, here are some things you can do about it:

1.Clean Out Your PS4’s Case

Dust accumulates in the PS4 case, clogging fans and blocking air flow. This dust can cause ventilation problems, trapping heat and preventing your PS4 from cooling itself properly. Be sure to clean your console’s case occasionally to prevent dust build-up.

The second, yet most important thing you need to do when your PS4 is overheating is to clean the fan that provides cooling to the CPU and graphics card. Over time, they build up layers of dust and dirt that slow them down and block airflow. Dirt—in the form of dust, pet hair, etc. It all finds a way into your PS4 and much of it gets stuck in the fan.

If you’re new to this, you better get the help of an experienced person to find out how you can open the PS4 to access and clean these parts.

Before you attempt to do any cleaning, however, follow these steps:

How to clean PS4 fan

Carefully clean the fan with a cotton swab dipped in a drop of alcohol. Make sure the alcohol has completely evaporated before you reconnect the laptop to the power.

You can also use a vacuum cleaner to remove the dust and dirt that clocks up the fan.. To prevent damage to the fan, do not let it revolve in the wrong direction. If you want to use canned air to clean the fan, stop the fan from spinning by holding it down.

Next, you can clean the exhaust port by sucking out air with a vacuum cleaner. The exhaust port usually sits on the side of the PS4. It’s the opening that blows out hot air.

The intake grills are small openings that allow air to be sucked into the PS4 by the revolving fans. They sit on the sides of your PS4. To clear the intake grills, spray them with canned air.

You don’t have to do this in the first place unless your PS4 still overheats despite the cleaning you made. This is the last resort before taking your console to a technician.

It happens sometimes that the thermal paste performance declined. That means its ability to transfer heat between the CPU and heat-sink has become weaker. If this is the case, replacing PS4 thermal paste can help here cool down your PS4 and prevent it from overheating.

Put the PS4 in a location where it can properly ventilate itself. Don’t push the case up against a wall so that the PS4’s vents become blocked or leave it near a radiator or heating vent. Just be careful to not block its air vents. For example, putting the PS4 down on a mattress, allowing it to sink in, and leaving it there can lead to overheating—especially if the PS4 is doing something demanding and generating heat it can’t get rid of.

Is the area you’re running your PS4 in just too hot or too dirty? Sometimes your only option is to move the PS4. A cooler and cleaner area of the same room might be fine, but you may have to consider moving the PS4 somewhere else entirely.

If moving your PS4 just isn’t an option, keep reading for more tips.

Invest in a Vertical Stand with a Cooling Fan

PS4 vertical stands are all the rage. So many PS4 users like to use one for their console to keep it as cool as possible. You can try obtaining one for your PS4 as well. We recommend PECHAM Vertical Stand. T his vertical stand has 2 built-in fans to dissipate heat from your PS4 keeping it working functionality. With that, there’s no need to worry about your PS4 overheating and burning your table from long hours of game playing.

PS4 does overheat sometimes and become too hot. You don’t have to panic as it’s usually an easily-resolvable issue. Mostly, all what you need is to clean the vents and the fan and everything will go right. Rebuilding the PS4 database or initializing it can be also a solution. This article has included almost every possible way to fix this issue.

Contents hide
1 How Your PS4 Cools Itself
1.1 A Brief on PS4 Cooling System
2 The Basics of Overheating PS4
2.1 What Causes PS4 to Overheat
3 Why an Overheated PS4 Is Dangerous
4 Fixing an Overheating PS4
4.1 1.Clean Out Your PS4’s Case
4.2 2.Fix Internal Cooling
4.2.1 How to clean PS4 fan
4.2.2 Replacing the thermal paste
4.3 3.Ensure Proper Ventilation
4.4 4.Move Your PS4
5 Invest in a Vertical Stand with a Cooling Fan
6 Conclusion