If you’re playing on the PlayStation 4 and have encountered an error message that reads (CE-34878-0), you’ve come to the right place. PS4 Error (CE-34878-0) points towards some kind of problem that causes the game or application that is currently in use to crash. It’s a general error that may occur due to corrupted data or a system software conflict. It may appear from time to time.

A restart is usually enough to fix the issue. But there are some cases where you need more troubleshooting. Generally, if this error happens regularly and renders the game unplayable, it could indicate more than a normal crash, which means your console may need service. 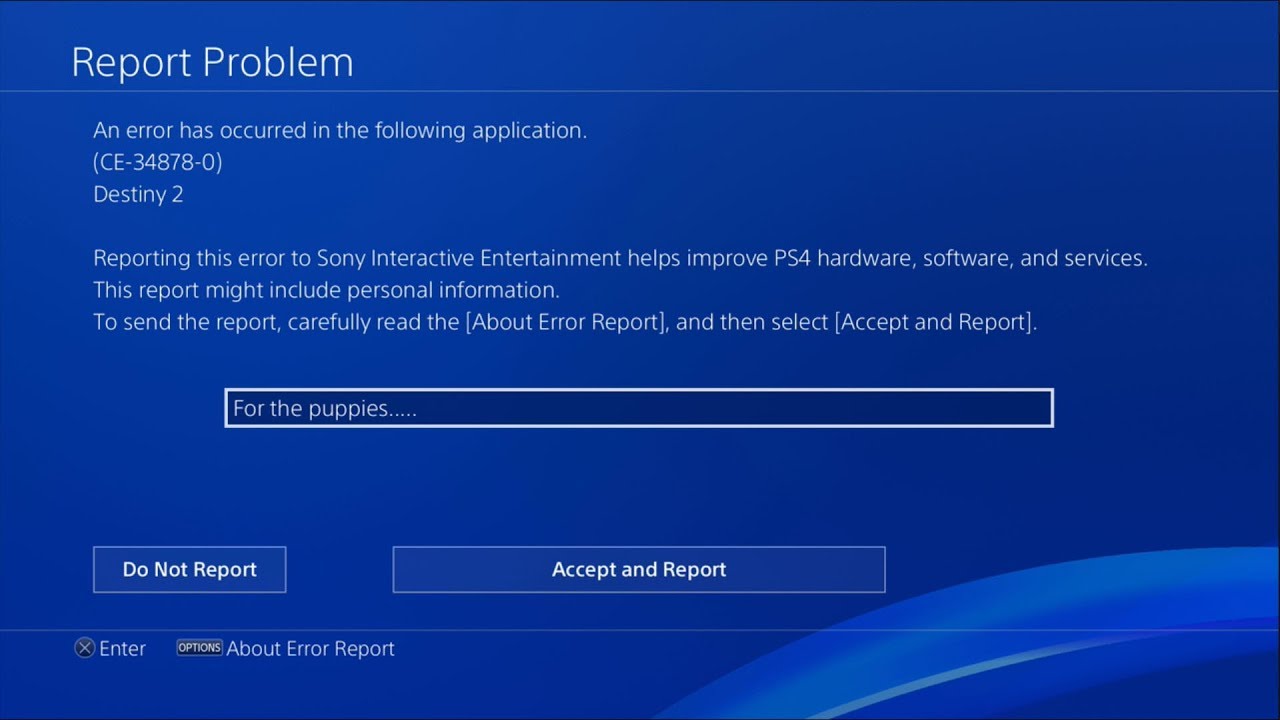 In many cases, the real cause of this error is a faulty storage device on which you installed the game/app. Usually it’s the PS4 internal hard drive that’s getting old and needs to “retire”.

You may not know that PS4 utilizes a cheap and outdated hard drive that no longer meets the minimal storage requirements of today. You can check the PS4 hard drive specs to fully understand why serious players go and upgrade their PS4’s hard drive. It’s not only the additional storage that allures them to replace the PS4 HDD, but also the solid performance. You can read more about upgrading PS4 internal hard drive and the benefits you’ll gain in this article.

So, let’s move on trying to fix that problem.

According to reports, there are six major PS4 games that cause this error during the gameplay. They are:

Other games are also involved, but these are the most ones that cause that error on PS4.

If you visit the official website of PlayStation, you’ll find a suggested set of steps to fix that error. [source]

An error has occurred with the application.

Many users find this suggested solution insufficient and not that useful. For that reason I have compiled this quick report to provide a fully detailed solution to that error. 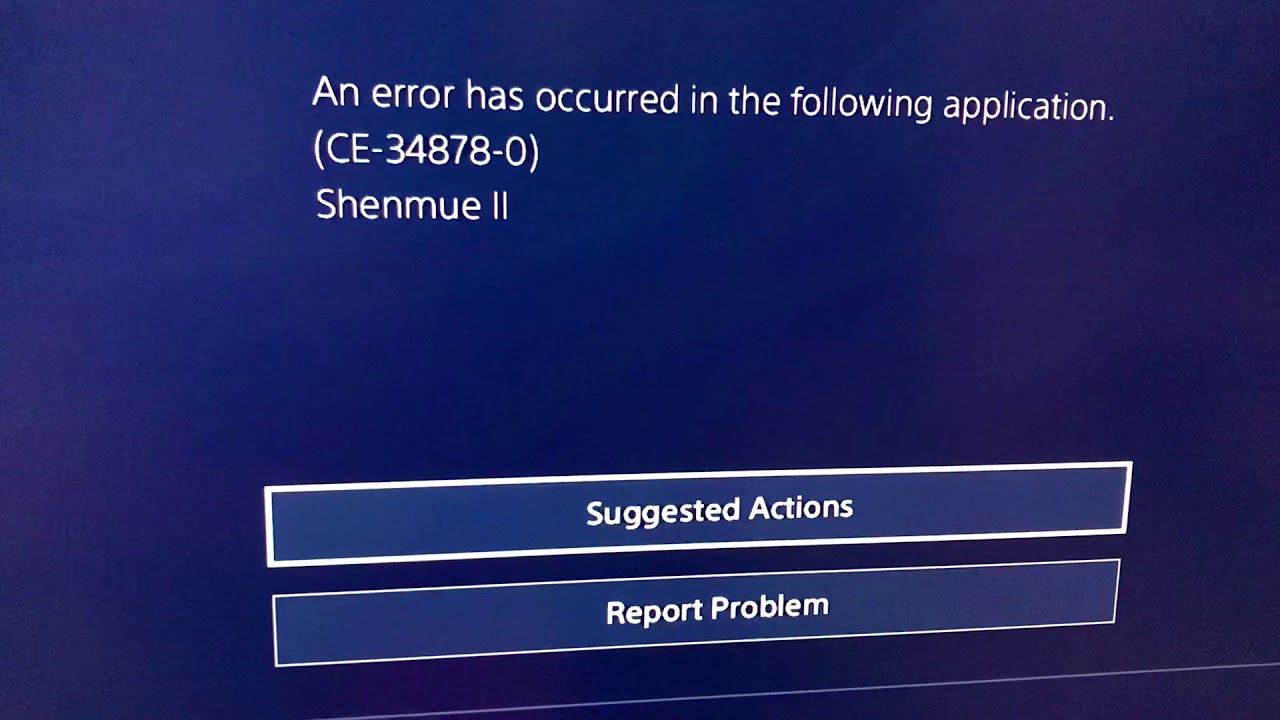 Before trying to fix PS4 Error Code (CE-34878-0), you have to diagnose that error by watching the behavior of your console. Be observant and take a note on when this error exactly happens.

Eventually, whatever the reason is, you better go through this guide and find a proper fix for Error Code (CE-34878-0) that suits you best.

When you see error code CE-34878-0, the first and easiest thing you should do is restart the PS4. Afterwards, check to see whether that has resolved the issue or not.

Follow these simple steps listed below to successfully carry out this operation.

Once the console boots up, launch that particular game/app that caused the error and see whether Error (CE-34878-0) appears again or not.

Updating PS4 system software can fix many issues related to the console’s performance. For that reason, it’s imperative to keep your console up to date with the latest version of system software.

To start the process, just do the following:

Now, if this has not fixed the error and you still seeing that annoying message, try the other solutions.

Sometimes the failure occurs from the game/app itself due to deficient/improper coded file. That’s why the manufacturers keep releasing updating patches for their games/apps to fix these issues. Once the process is complete, try to launch the gane/app and see whether the problem has gone or not yet.

If a PS Camera is connected to the system, remove it and reboot the system, then turn off Enable Face Recognition.

Some gamers confirmed that disabling recently added mods helped them repair this error code. While this solution might not work for all users, it is worth trying it out. 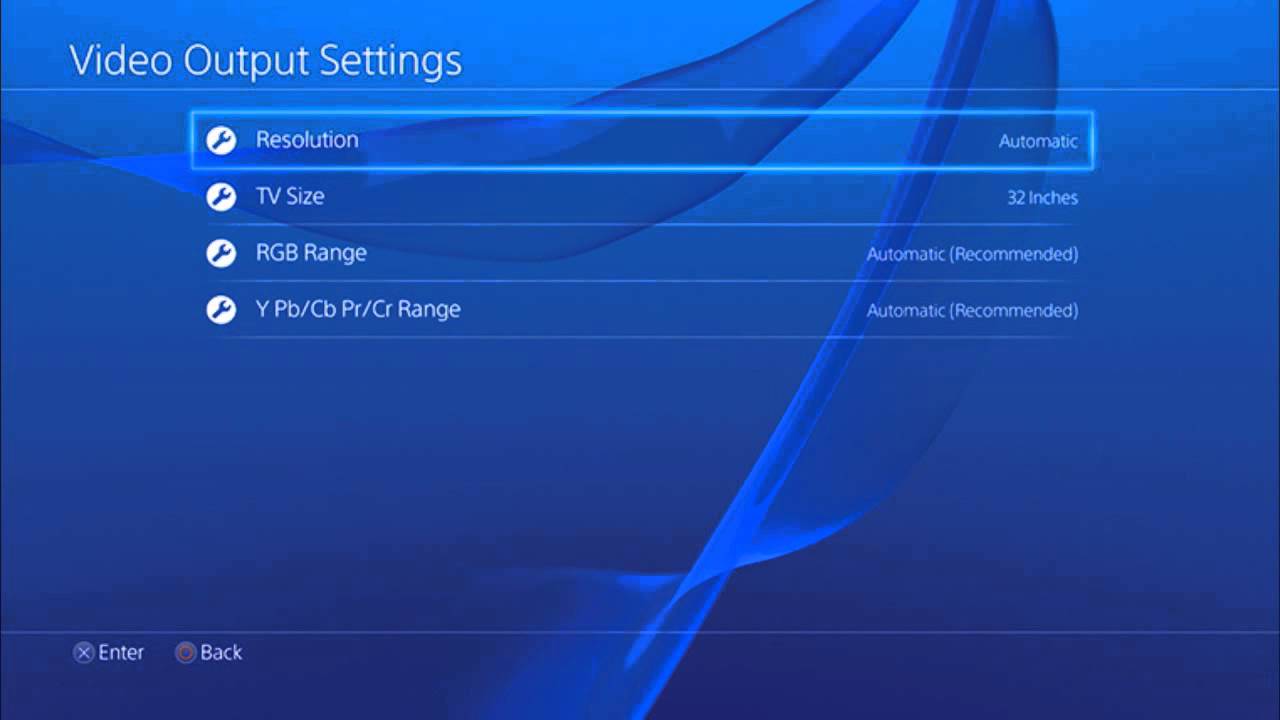 It has been reported by some users that changing the video output settings from Automatic to 720p would fix this problem. Other resolutions may work fine as well. So, try all of them and see what suits you best.

By default, the PlayStation 4 will automatically manage video output settings, but if you want to use a specific video resolution:

If you’re not considering upgrading the PS4 internal hard drive with a more powerful drive any time sooner, or you have already done so but faced this error, the hard drive may malfunction and needs service.

The hard drive failure is a common incident that every savvy must have encountered. It happens due to several reasons, especially the presence of bad sectors that hinder the hard drive to operate properly. Additionally, if the PS4 HDD doesn’t make any kind of noise (clicking/grinding), there’s a big chance to fix it. Check out this article to learn more about PS4 hard drive failure and how to repair it.

Sometimes rebuilding the PS4 database can resolve this problem and fix that error. It’s a very easy process to fulfill, but it may take a few hours though. To successfully rebuild the PS4 database, please follow these steps:

To reset PS4 to factory settings, you have to perform PS4 initialization. This feature can resolve so many issues related to the performance of PS4. So, every PS4 user must know how to do it the right way. Just in case.

Before we begin, you should know that a factory reset completely wipes the console’s hard drive and can even remove its system software. It’s the penultimate resort when a software glitch stops your PlayStation 4 dead in its tracks, particularly when booting up or when you want to make sure the console no longer has your data on it.

There are two ways to reset your PS4 — From the console’s dashboard or in Safe Mode if the console is having boot-up issues. For PS4 error (CE-34878-0), you need to choose the full initialization.

Do not turn off your PS system during initialization. Doing this might damage your system.

You won’t come to this point until you’ve tried everything above and none worked. In fact, this suggestion needs somewhat a savvy to carry out. You need to make it the last do-it-yourself resort to fix Error [CE-34878-0] in PS4 system.

You need at this stage to clear the PS4 CMOS memory in order to set things right. This process might be kind of difficult and time consuming because you need to open up the PS4 case and carefully remove the PS4 CMOS battery.

Simply, if you can’t do it, don’t try it. Seek help from a well-versed technician.

If absolutely none of the solutions listed and described above were enough to get rid of error code (CE-34878-0) in your case, the cause of the issue might not be simply something you can fix on your own. It might actually be something that’s much deeper and severe than you think it is. That being the case, if trying to fix this problem on your own has turned out to be a bust, I advise that you use PlayStation Support and see what the professionals have to say about it.

This error code refers to the situation where the game/app you're using has corrupted files and must be repaired.

Error CE-34878-0 means the currently-in-use game/app can no longer continue due to some data corruption going on within the game itself.

There are several methods to fix Error CE-34878-0, including reinstalling the particular game that causes the error, updating it, update the PS4 system software, and more..

Some files of the game/app that's currently in use are corrupted and the PS4 system can't process the. This results in a conflict between the game and the system itself, therefore it halts and stops working.