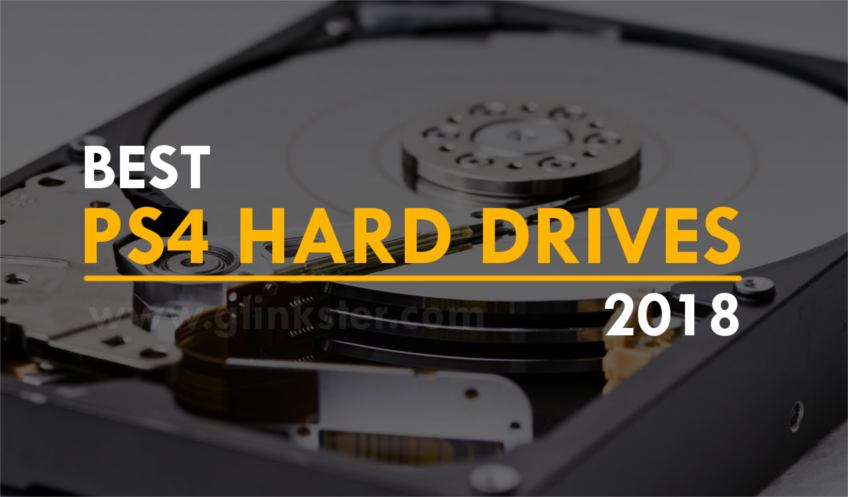 The need for replacing and upgrading PS4 stock hard drive is inevitable. That’s because PS4 comes with a low-quality, cheap and obsolete hard drive that might fail in a short time. Let alone the limited storage capacity of this hard drive. 500gb or even 1tb does literally nothing in the modern age of gaming. For these two primary reasons you have to seriously consider upgrading with a high-performance PS4 compatible internal hard drive. Here in this article we’ll list the best available drives for this purpose. 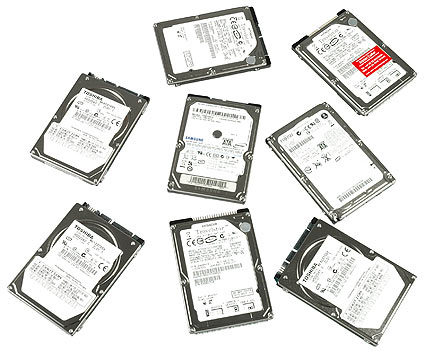 Determining the best PS4 compatible hard drive upgrade depends, in fact, on your needs. Therefore, what might be best for you might not be so for others.

According to my technical knowledge as an expert, and based on the long research I made on this matter, I’ve laid out what I consider the best internal hard drive upgrades for PS4. These drive are direct HDD replacement, which means you don’t need any additional, special equipment to carry it out. These drives fit also into other models of PS4 (i.e. PS4 Slim and PS4 Pro).

If you’re looking for a faster and more reliable solution for your PS4, an SSD might be it. But before you decide to go for one, please click here to read more about it.

Worth it to say at this point that all the drives I recommend are reliable and offer solid performance. They are covered with a warranty between 2-5 years, depending on the quality of the drive you pick.

Additionally, be sure that all the 2.5-inch drives listed below are fully compatible with PS4 storage upgrade standards.

It’s a fact that there are not many modern 2.5-inch hard drives on the market. That’s because the storage industry is mostly focusing on producing and developing SSDs. But still, you can find good brands that work very well with PS4 and offer high performance and solid reliability. The only two players in this field are Seagate and Western Digital (WD). Both produce real solid drives that last for too long. 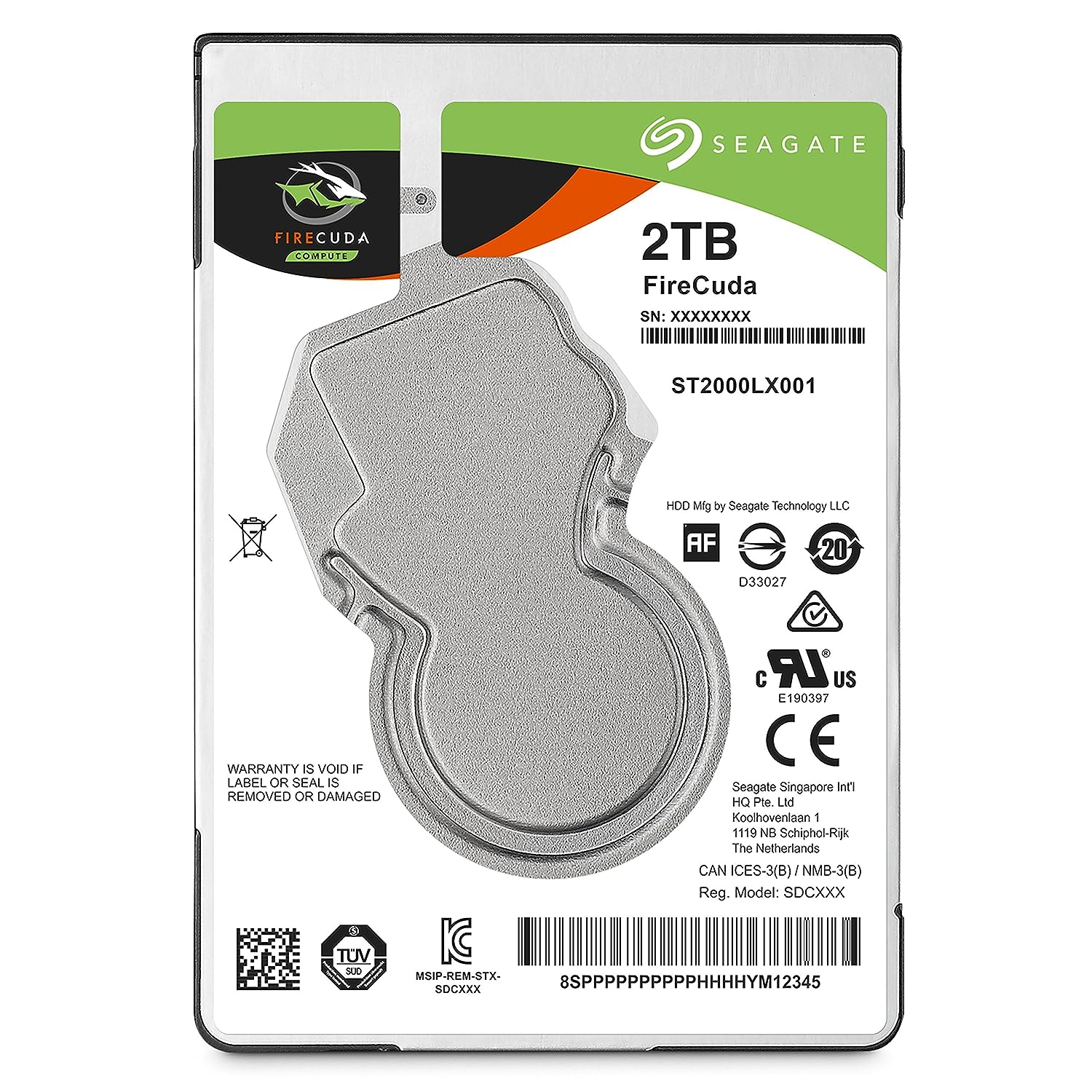 The only difference between SSHD and HDD is the additional SSD caching system in the favor of SSHD. Thus, an SSHD has a multi caching system, (the cache buffer as 1st tier and a small portion of SSD as 2nd tier). That way an SSHD was able to combine the capacious storage space of HDD with the high speed of SSD. All of that in a reasonable price.

Seagate Firecuda Gaming SSHD comes with 128mb buffer cache and 8gb SSD cache. It’s configured with SATA III interface and spins at 5400 RPM/s. The company claims that this drive offers a semi-SSD performance. Theoretically this might be correct. But tests showed that this drive couldn’t exceed 80% of the SSD performance in the real world. But still this is a very high performance level compared to traditional hard drives. For this reason, this drive is deemed the fastest 2.5-inch hard drive on earth.

One of the most powerful aspects in this drive is its astonishingly 5 year warranty. If this indicates something, it’s the solid reliability and log durability this drive boasts.

You can read a detailed review on this drive here. 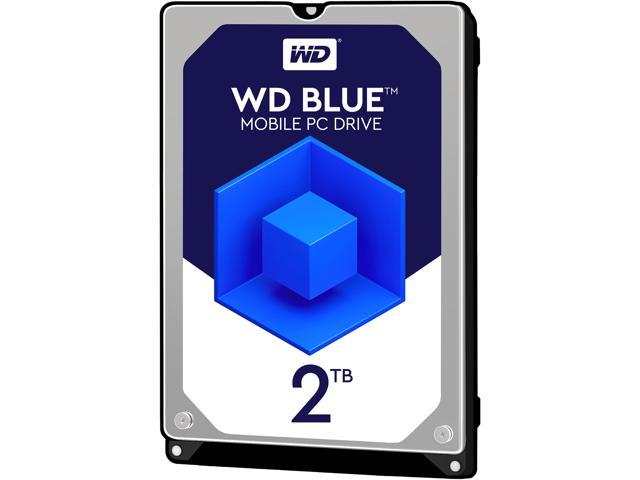 So many tech savvies are not aware that Western Digital (WD) is BACK to producing 2.5-inch internal hard drives. It has been a somewhat long cutout. WD’s latest production in this field is called “WD Blue Mobile Hard Drive“. It’s a traditional hard drive (not an SSHD) with some high-end specs.

Seagate efforts in developing 2.5-inch hard drives are explicitly much bigger. You can tell that by tracking their HDD product development line on the market. Maybe this makes Seagate more experienced, thus more trustworthy. But, on the other hand, WD has totally acquired HGST in 2011. HGST 2.5-inch hard drives were known at that time as the most reliable and best performing drives of their class.

Honestly speaking, I’ve not tested this drive. So I can’t tell you whether it’s better than the third drive in this list or not. But the clean history of Hitachi inc. in producing high-end 2.5″ hard drives has remarkably impacted my selections.

There is only two different sizes of this model—1TB and 2TB. If you want to get the 1TB size, please click here. 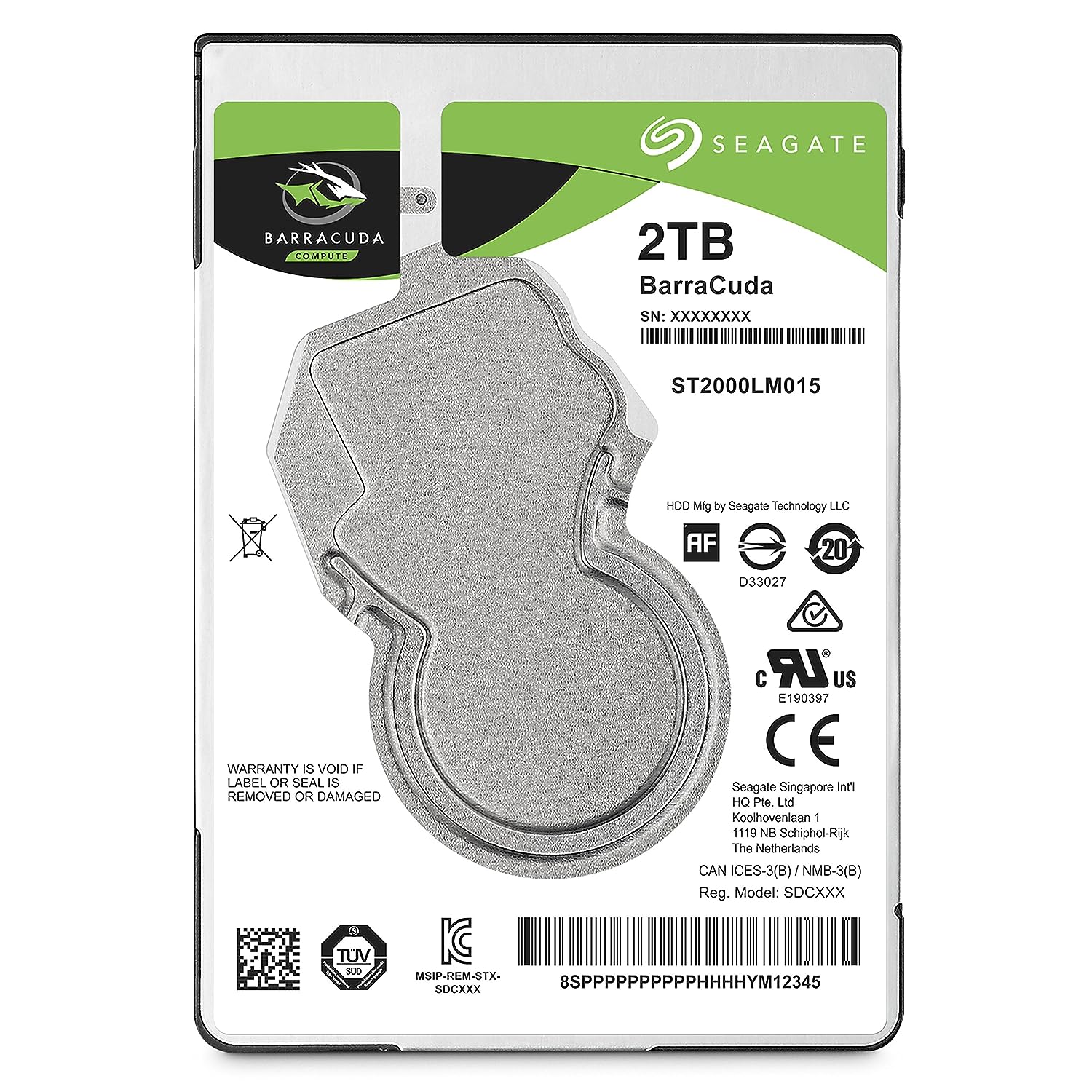 This is the traditional hard drive version of our top recommended drive—Seagate FireCuda SSHD. They are both identical in all aspects, EXCEPT the multi-tier caching technology. Where the Firecuda SSHD has two caching tiers, this drive has only one based on the cache buffer.

The difference in price between the two drives is less than $10. So, I am not sure why one would go for this regular hard drive and waive two additional strong features the Firecuda SSHD has—2nd tier cache and 5-year warranty.

Once this drive was released, it was titled the fastest 2tb 2.5-inch traditional hard drive on the market. I don’t know though what the situation of this title is now with the release of WD Blue 2tb mobile hard drive.

This traditional 2.5″ hard drive implements the latest storage technologies to provide a solid performance. Therefore, it’s still a much better option for PS4 than the stock hard drive.

Surely it is a fully PS4 compatible internal hard drive. In fact, you shouldn’t be concerned about the compatibility issue with the drives listed here. All of them are fully compatible with PS4 storage upgrade standards.

This drive spins at 5400RPM, is configured with SATA III interface and comes with 128mb cache buffer size.

IMPORTANT NOTE: There is misleading information on the sales page of this product on Amazon and the drive’s official website as well. Please read this article for more information.

There is only three different sizes of this model that fits inside PS4 drive cage—500gb, 1tb and 2tb. 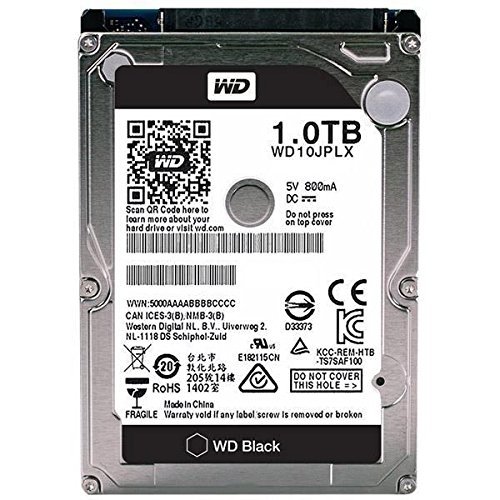 If you ask me about the best PS4 compatible internal hard drive with 1tb capacity, I will undoubtedly answer: WD Black 1TB Performance Mobile Hard Drive. This is the 2.5″ model of the very popular, enterprise-level, WD Black Performance Hard Drive that, until the release of this drive, was only coming in 3.5″ form factor that suits desktop computers only.

But you have to remember though that this is a TRADITIONAL hard drive. Means it cannot compete with SSHD. It only works better than SSHD in two positions: online gaming and external storage.

Probably the only major disadvantage of this drive is its limited storage capacity. It only comes in 1tb capacity, which, in the modern age of gaming, is considered small. But, after all, it depends on who you are. Are you a “small” user or “HUGE”?

This drive also comes with 32mb memory cache, unlike its competitor Seagate Barracuda that comes with 128mb. This might be a disadvantage. But if you bear in mind that it’s only 1TB and this drive is used inside a game console, then this issue doesn’t matter at all. I’m talking from a technical perspective, so trust me.

As for the major advantages of this high-end hard drive, they’re basically featured in two aspects—Speed and warranty. The spindle speed of this drive is 7200RPM, which is very rare to find in 2.5″ form factor. That’s because HDD manufacturers are too concerned about mobility performance since these drives are widely used in mobile/portable devices. For this main reason they lower the spindle speed to 5400RPM to protect their drives from failure if they are subjected to shock or vibration. Therefore, finding a 2.5″ hard drive that runs at 7200RPM is really wonderful.

As for the warranty, this drive is backed with 5-year limited warranty. Too long so as to gain your trust.

Unfortunately, 1tb is the only size of this model.

In order to choose the right hard drive upgrade for your PS4, you need to make sure it’s compatible with the upgrade standards. These standards are specified by Sony. Only the drives that meet all of them can be used for the upgrade purpose. They are:

Once the drive meets all these standards, you’ve to relax it’s relevant to be a DIRECT hard drive upgrade for PS4.

Using an SSD for PS4 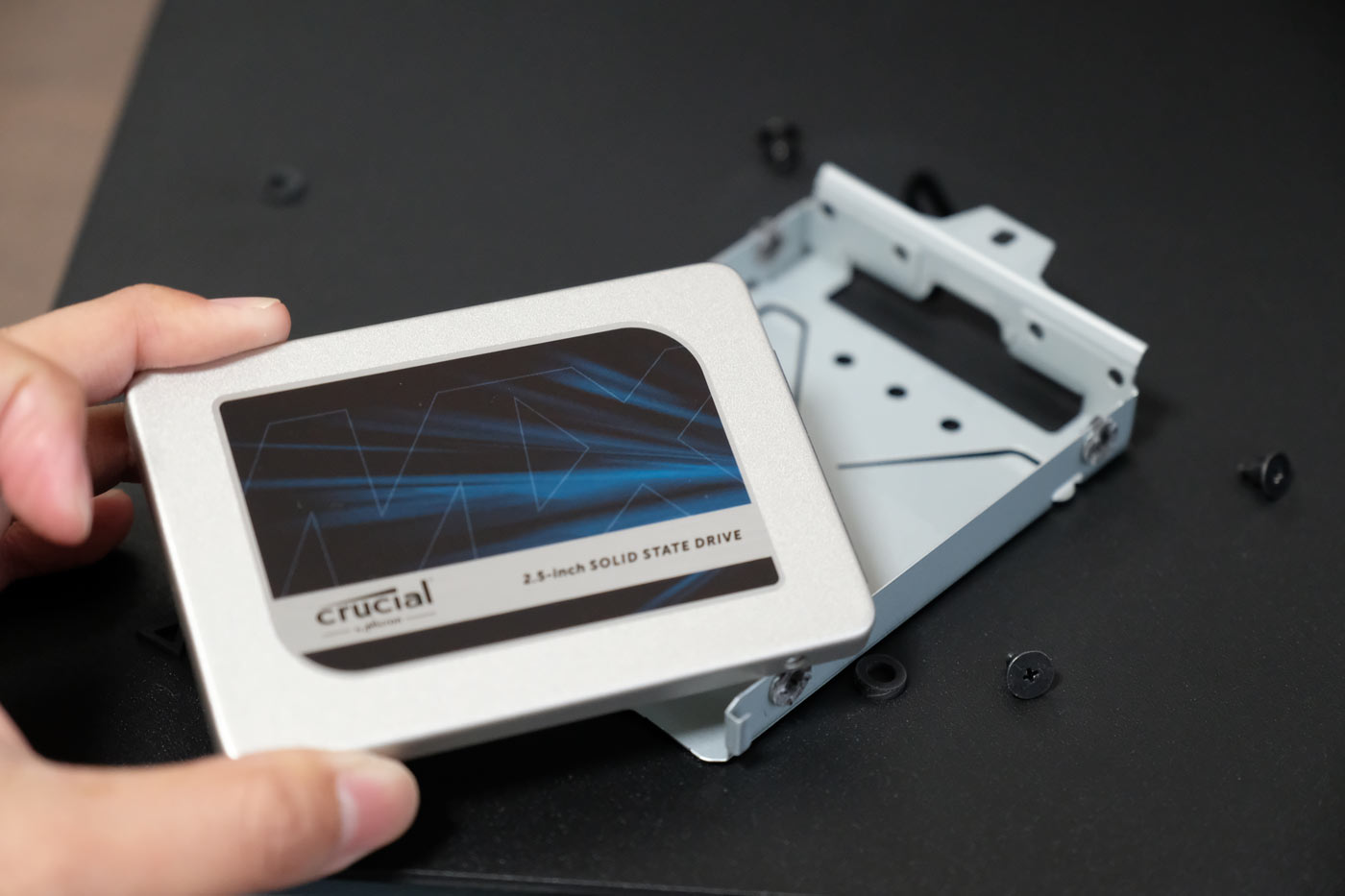 When it comes to performance, nothing can beat a solid state drive (SSD). It is, undoubtedly, the fastest and most reliable storage device on earth. If added to a computer, the file loading speed will increase dramatically to up to 5 times compared with regular hard drives. But unfortunately, this is not the case with PS4. If you’re lucky enough, you’ll get maximum 50% of performance improvement. That’s mainly due to the limitation of PS4 CPU and the serial bus interface. (Read more about that on PS4 SSD Upgrade Guide)

As for PS4 Pro console, an SSD will perform better with it. That’s because PS4 Pro supports SATA III connection that offers much higher transfer speed. Additionally, the CPU of PS4 Pro is stronger than the standard PS4. So, having an SSD for PS4 Pro is not a waste of money if you can afford it. (Read more on that in our PS4 Pro SSD Upgrade Guide).

If you still want an SSD for your PS4, please check our list of best SSD recommendations for PS4. They work great also with PS4 Pro.

So, here, at this point, our trip end. The list presented above features the best PS4 compatible hard drives available on the market as of today. All of them offer solid performance and high reliability so you can’t go wrong with any of them. Furthermore, their compatibility with PS4 is confirmed. I wouldn’t add any drive into that list if it was not compatible with PS4. So rest assure about that.

If you want a detailed guide on how to upgrade your PS4 internal hard drive, please refer to this article. It has almost everything you want to know about that issue with valuable tips and enriched information.